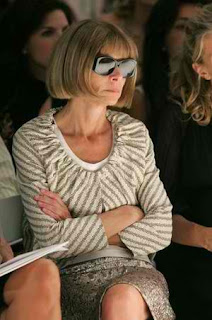 Anna Wintour is the most powerful woman in fashion. PERIOD. There isn't any aspect in the fashion world where she is not involved in. From sales to design editing to celebrity styling to rubbing elbows with the mega-millionaires who own the conglomerates that turn our closets topsy turvy, she is immersed all the way to her neck in everything regarding the world of style. She advises and dictates what goes into a famous designer's show (advise and dictate become synonymous in her parlance), she launches young designers and catapults them into fame and megabucks by recommending them to all the right people and labels. (She told OPRAH WINFREY to lose weight to be on the cover of her magazine HUH!!!!!) She is the chief editor of and figuratively owns Vogue magazine, the US chapter and is responsible for 101% of what goes in and out the issues. Nothing escapes her scrutinizing eyes in terms of content or creativity when it comes to her magazine. She is not warm as her publisher says because she does not need to reach out to people who do not need her accessibility. Her private life is...private. She plays tennis almost everyday (she is already my idol) to keep fit and she is very fit, very skinny in fact. She can wear anything because she has the body and she has the power to acquire any designer's garb she wants. The infamous fringe and Chanel sunglasses are signature looks that she has never let go of for the past couple of years. She is Mount Vesuvius personified!!!. 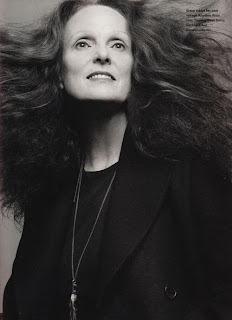 Grace Coddington is the creative director of Vogue USA. She is responsible for the styling as well as the conceptualizing of the magazine's many fantastic editorial images which highlight the clothes and style of the season worn by the skinniest girls you can ever see in the planet. Coddington's creative eye and knack for ideas are both phenomenal. She takes out a story, a scenario, a seemingly boring and monotonous daily activity, a historical element from the past and turns it into the creative backdrop of a photoshoot but highlighting the relevance of today's current trends. She is responsible for so many of Vogue's uber original and iconic pixelated concepts e.g models wearing sheer dresses while washing their clothes in the laundromat, Kiera Knightley and designers all cast straight out of "The Wizard of Oz" fairytale book scenario, a shot of a photographer jumping while shooting a jumping model, heavily made-up girls donning John Galliano in a late night French restaurant straight out of a Brassai photograph, backpacking supermodels trying to mix and match with a crowd of Peruvian/ Andean revelers in a Teotihuacan scenario among so many others. If there is another power in Vogue office that does not necessarily complement Wintour's but is equally as forceful and influential creatively it is that of Coddington's. She believes that if you never close your eyes even if it's somewhere as mundane as being driven by a taxi to some place, you will see an outside world that will give you ideas. Any idea has value at some point in your life or career.
These are the two powerful characters that turn the wheels at the New York offices of Vogue at least if not the world of style. They are often in conflict with one another but have surprisingly worked together in the same offices for 20 years now. Surprising isn't it? Grace said it best when she was trying to describe their relationship, "I know when to stop pushing her, she doesn't know when to stop pushing me."
This is the backdrop for the documentary, "The September Issue." I highly recommend watching it. Even when you are just on the fringes of the fashion world or even out of it which I hardly doubt anybody ever really is. I mean if you're a businessman or a CEO, you always want to know which Hermes or Fendi ties look good on your suit, or which socks best complement your Bruno Magli shoes noh? Don't get me started on whether women are into fashion si? LOL
It's a fantastic film that documents the inner workings of the VOGUE team and Anna Wintour and Grace and the models and photographers and staff when they're trying to prep, create and build the magazine's September issue. It's suppose to be the biggest issue of the year because it's where all the new trends are discussed, featured and advertised. All the designers, stylists, cosmetic companies will kill to be featured in that issue. The movie showed the various chaotic elements all throughout the buildup towards the publication of the magazine. It also touches a little bit on the stories behind two of Vogue's most powerful people as well as the instances and relationships they needed to work on to achieve their Herculean status in the fashion world. It is beautiful and heartbreaking! In the end these elements coalesce to become the brightest issue of the year, Vogue magazine's September outing :)
at November 28, 2010 3 comments: Links to this post

To extract an idea...

There will be movies that make an impressive mark on people and their lives and then there will be movies that will shatter the whole world with the creativity, fantasy and sharpness with which the script was written and with the supple flow of the story. These are the movies that remind us that the film industry is in a progressive state rather than stuck in a state of regression.
I will not care to tell the story about the film "Inception" because many of you have probably seen it (but will probably write about it in such a position in the future anyway LOL). I will discuss it from a perspective that's sort of external and not assume the storyteller/ fictional writer position. Another reason I will choose not to dissect the movie so much is I have not really totally gotten to the coherence of all the scenes which forms part and parcel of the overall plot but based on the things I have discerned from the movie while I was not using it as a sleeping tablet and was actually viewing it, it is one of the most wonderfully crafted ideas in the last 5 years. The actors are stellar but the film would probably have been equally as forceful even if it did not have an all-star cast.
They set up an arcane and intelligible series of situations that made viewers sit on the edge of their seats all the time and make sure not to miss a single scene because of how each scenario was stitched carefully to another in the effort to generate an interest within the viewer that wouldn't wane from the beginning to the end. The mysterious symbolic objects in the film too gave it immortal status in this viewer's perspective. The "top" like object referred to as a totem that spun round and round and round in your dream but would trickle and fall flat if you were awake was an important antidote to the film. The film had many spellbinding elements such as kicks and the music played in order to ward off the lethargy brought about by their dreams and bring them back the world of reality.
The presence of a villainess woman - sensual, mysterious and lethal is also a key ingredient in the film because her appearances all throughout the film coincided with significant moments which generated lots of intensity and confusion among the main characters. Women being the Achilles' heels of men has long been immortalized in many motion pictures and the venomously sly character of the woman weaved itself through many scenes in the film here. She posed a great danger to the central mission of the team but ironically she was also instrumental in keeping the sanity of the creator of the master plan.
When you watch the film trailer you will most likely conclude that it's another movie that tries to fill in the genre introduced by the Matrix, Transformers and many films that require animation that wants to stump and impress wide-eyed audience viewers like us with earth-shattering destruction and histrionic sounds. But the sheer intelligibility and brilliance of the plot totally differentiates it from the usual special effect-films we have seen in the past. Only a true cinephile as well as a moderately analytical mind can appreciate and embrace the beauty and effect of the film on the reality of our existence as well as that of an existence that escapes us - dreams.
at November 27, 2010 No comments: Links to this post

This is my future husband!!! hahahahaha
Tres Cute
Tres rebellious ( refer to the fact he hates two hour movies but he is a filmstar!!!!)
Tres funnyish
Tres skinny-ish
Tres beautiful accent :)
He probably has a big ______ ! hahahahahahahahaha
Don't like the smoking though but pretty forgivable when he looks this nice :)
HE took movie clips of himself when he was a kid! How cute is thattt! Destined to be a movie star eh???
Love the taxi ride and the walk through urban Hong kong...And the meal at the Chinese kitchenette, PRICELESSSSSSSSS!!!! Hahaha